Coffee Beans:
I'm now pleased to say that PS3 owners will only have to wait a little while longer to play a new FPS that has Sony Move(and Navigation) support, 60+ maps, a map editor, online multi-player, as well as a solid single-player offering.
What game am I talking about, and when will it release? 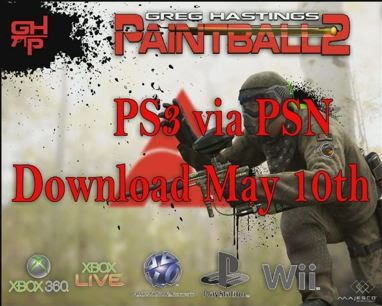 If you want to hear more on the game, and the development process; make sure to read my interview portions with the developer of the game, Super X Studios.  You can find the interview split up, HERE and HERE.
If you're interested to know more about the game and the content it will be offering, the video below should give you a good idea of the content you can be expecting from the game when it releases on May 10.


Questions:
Do any of you plan on picking this up day one?  Or, is it a game you're interested in, but perhaps want some more coverage of the PS3 version when it releases?
I'll probably be picking it up day one, to help provide coverage for it.

Wii and Xbox 360 owners can currently purchase the game via retail, as it was released for both of those systems last September.  You can see prices of the Wii and Xbox 360 versions of Greg Hastings Paintball 2 on Amazon.com linked below.

Posted by coffeewithgames at 11:51 PM