Monster Hunter Tri's - A Stick in the Mud! (Data)

Quick Brew Info:
We last looked at Monster Hunter Tri's play-time data 3-weeks ago, from August 16.  With this week's data, I am including a monster hunt video I went on in the single-player campaign a few days ago.  In the video, I'm hunting a Barroth.  If anybody has hunted a Barroth, you probably immediately knew what I meant with "A Stick in the Mud!" in the title for this post.

Monster Hunter Tri's average hours, the 76 Hours 26 Minutes "per person", have increased 4 Hours 58 Minutes, since 3-weeks ago. The game now has 2,989,625 Total Hours reported for game-play, an increase of 427,475 game-play hours since the August 16 Nintendo Channel data.

Amazon.com sale rank is #981, and the current sale price is $47.91.
The sales rank #981 is the lowest recorded sales rank I have seen Monster Hunter Tri have since it released in April. 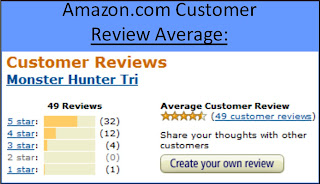 
As for the play-time data, I believe Monster Hunter Tri will become the "most-player" Wii game according to average play-time "per person", within the next 3-weeks; passing Super Smash Bros. Brawl.

The low Amazon.com sales rank is interesting, though it could just be a very temporary rank and tomorrow it could be back up in the #400+ sales rank range it had been in previous weeks.

Questions:
Is anybody still playing Monster Hunter Tri on a regular basis?  If so, what nights/times of the week would work best to try to get online for some monster hunting as a group?


If you haven't purchased Monster Hunter Tri, and want to join in the monster hunting, you can see new and used prices on Amazon.com linked below: