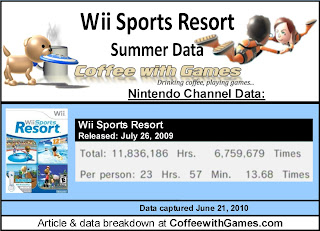 Amazon.com sale rank was #70, for the software by itself, not counting what the Wii bundles are ranked.  The game is selling for $48.93.
Review Score Averages:
Wii Sports Resort's review score average on GameRankings.com has not changed since I posted the data back on July 2.  WSR still has a review score average of 83.00%. based on 51 reviews.
According to 505 Amazon.com customer reviews, Wii Sports Resort has a 4.5 out of 5 Star rating.

Thoughts & Questions:
So, according the Nintendo Channel play-time data, Wii owners in America spent 5,202,985 hours on Wuhu Island from June 21 through September 20; probably making it the most popular beach resort for 2010.
According to NPD data, in July and August this year, the Wii sold 498,200 units.  We don't have the specific numbers of the last 9 days of June, or the first 20 days of September so far; but I would think it is safe to assume the Wii sold at least 600,000 units during the days presented by the data.
If 600,000 is close to how many Wiis were sold, that means 600,000 copies of Wii Sports Resort were included with those bundles, plus however many units WSR sold at retail by itself.  Based off the sales and increased number of players over the summer, that means about 20-25% of new Wii Sports Resort owners started using the Nintendo Channel and approved to have their play-time data reported.
Did any of you spend some hours on Wuhu Island this summer?  If so, what were your favorite Wii Sports Resort activities?
I still don't own Wii Sports Resort, and the last time I visited Wuhu Island was back in December.
If you are interested in Wii Sports Resort, you can see prices for it on Amazon.com linked below:
Posted by coffeewithgames at 1:07 AM