I was over on NintendoLife's forums, when I saw a fellow gamer said, "I can't beat the 4th mission of the American campaign.  I keep getting ambushed and eventually shot down before I can take out very many of the 3rd wave of fighters."
Below is a video showing the mission, Darwin Under Attack, from the WiiWare game Pearl Harbor Trilogy - 1941: Red Sun Rising.
The mission objective for Darwin Under Attack is "Engage enemy aircraft", while flying in the P-40 fighter.  I was using the Wii Remote controls only(pictured below). 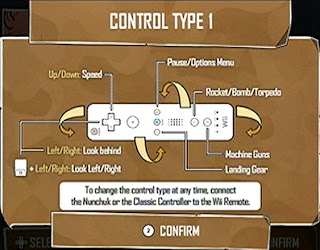 Caffeinated Thoughts:
Darwin Under Attack requires you to engage/survive three "waves" of enemy fighters.  You may notice in the video I am able to get through the first two waves without any major problems; but when the third wave of enemy fighters arrive, I start taking more damage.
When the "Damage Critical" message flashes and the warning buzzer/siren goes off, your fighter plane can't take many more shots before being destroyed.
The strategy I use quite often now to survive when I get the "Damage Critical" warning is to immediately bank my fighter either to the left or right, depending where the shots are coming from.  After banking left/right, I try to start speeding up and get my fighter to climb as high as it will go.
Once my fighter plane starts leveling out, I usually will dive my plane for the ground/water, whatever is beneath me, and start cutting the speed completely out, until my plane is idling while diving.
The enemy fighters may still be behind you; but by cutting your fighter's speed, I find that many times the enemy fighters will come flying past you, allowing you to get behind one or two of them and turn the dogfight in your favor.  You can see this a few times in the video.
I hope this video and "advice" on how to survive, helps Bulbasaurus Rex complete this mission!
Questions:
Does anybody else have any missions from Pearl Harbor Trilogy they would like to see some game-play footage from?  Or, perhaps just see more game-play footage from the game overall?
If anybody is interested in downloading Pearl Harbor Trilogy - 1941: Red Sun Rising, it is available on the Wii's Shop Channel for 700 Wii Points.  You can purchase the game using a credit card on the system itself, or by using a Nintendo Wii Points card:
Posted by coffeewithgames at 4:03 PM