In 2009, there were two FPS games released on Nintendo's WiiWare service.
Both WiiWare FPS games were released by Hudson Entertainment.

Onslaught was released on February 23, 2009, and was the first FPS game to be released on the WiiWare service.  Onslaught is available for 1000 Wii Points

Water Warfare was the second FPS game released by Hudson Entertainment on WiiWare.
Water Warfare released on June 29, 2009 and is available for 800 Wii Points, the equivalent of $8.

How much do Wii owners play WiiWare FPS games?
Take a look at the stats from two weeks worth of data: 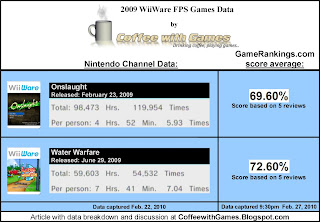 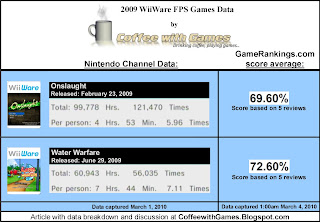 on just one game, which one would you recommend more?
If you aren't familiar with either Onslaught or Water Warfare, you can view their trailers below(click HERE):
Posted by coffeewithgames at 5:09 PM