Drink of Choice when Gaming: 400+ Cups

You may have wondered why my blog is named, "CoffeewithGames".

(one of my first banners I made for the blog)

A Brief History:
I can remember starting to drink coffee in the sixth grade.  My coffee would be fixed up with cream/sweetener.
In high school, some friends and I would go to IHOP late at night, and we would almost always get the "Never Empty Coffee Pot", sometimes I would use cream/sugar, sometimes I would drink it regular.

In 2003 when I was still living in Louisiana, I started going to a local coffee shop almost on a daily basis.
I would get a cup of coffee and while I was drinking the coffee, I would usually play a game(or two) of chess at the coffee shop.

Many years later, in 2010, I'm still drinking coffee daily!
I ended up making an email address, followed by an account on GoNintendo.com a few years back, and my email/username was/is, CoffeewithChess.
I haven't played a game of chess in a while, but I do play video games on a regular basis.
When I'm on the computer chatting/commenting on video game stories, I usually have a cup of coffee sitting on the computer desk(as I do now @ 12:58AM on 3-22-10).

When I was setting up this blog last year, I was trying to decide on a name, and ended up replacing "chess" with "games", from my normal username on different sites.
I created a few banners(one seen in this post) for my blog, using a cup with coffee in it as the center logo.  Then a reader known as, ArakniD, from GoNintendo.com visited my blog one day, and created the current banner used on the site, without me even asking him to do it!  It was/is greatly appreciated!

My Coffee/Game Addiction:
Coffee is my drink of choice most days.
If I don't have at least one cup of coffee in a 12-24 hour period, I usually end up with a migraine.
I enjoy playing videos games, and reading news about the video game industry.
I remember first getting into gaming, when my dad bought my brother and me the NES system, with the Mario/Duck Hunt bundle.  My "addiction" to the video game world has continued ever since.
Luckily, I don't get a migraine if I don't play a game within a 12-24 hour period!

When I'm playing a video game I usually have a pot of coffee on, so if I pause the game or come to the end of a level, I can easily get up and go get another cup.
In my first video I created for the blog using my capture device, my wife and I were playing New Super Mario Bros. Wii

, I actually say near the very end of the video, "...I'm gonna go get some coffee."
The line wasn't planned,  and there really was coffee in the pot.
I didn't even realize I had said it, until I was putting the video and audio together.

A few weeks ago, my wife decided she was going to start tracking how much coffee we(I) drink.
She had purchased us a container of Folgers "French Roast"

coffee(pictured below), that's a medium-dark roast.

Also, I know one night I brought some to a friend's house(Cansecoholic), and he and I drank about 8 cups between the two of us.

What about the other 208 cups of coffee?

Well, our ten month old son doesn't drink coffee(yet), so I know he didn't drink any of those cups.

When the first container was emptied on February 26, 2010, I opened the next container of Folgers coffee.  My wife had bought us the "Brazillian Blend", a medium roast(pictured below). 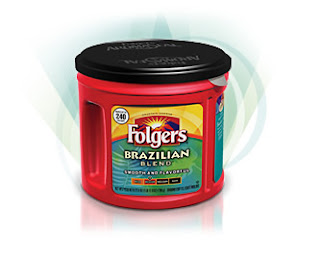 Again, the container was the same as the first in amount of coffee it made, "...UP TO 240 6 FL OZ CUPS", containing "1 LB 11.8 OZ" of coffee.
I thought to myself after realizing how much I drank from the first container, "I'm going to slow down with this one."
Well, on March 11, 2010, the second container was empty.
Just 13 days after I had opened it!  So, 240 cups of coffee in 13 days!  At least it lasted one more day, right?
Again, my wife averaged the same one cup per day, and she even skipped a few days during this time.
So, let's say she had 26 cups of coffee during the 13 days, that would leave 214 cups of coffee for somebody else to have finished off.
What About Games:
During the 25 day period, I completed Mirror's Edge

on my PS3, and I played a few hours of Rabbids Go Home

on the Wii, before I had to return it.
My wife played some Animal Crossing: City Folk

, and she also played Rabbids Go Home as well.
In the period of 25 days, I drank about 422 cups of coffee(give or take a few).
Averaging about 16 cups per day.
You may be thinking, "Is that a normal amount to drink?"  I don't know, but I think it's on the high side from what I've heard from friends and family.
Also, I should probably note that I now drink about 99% of my coffee just freshly brewed, no sugar or cream added in it.
Coffee is my drink of choice when gaming, and just during my normal daily routine.
Questions:
What is your drink of choice when gaming?
If you like coffee, do you drink it regular?  Or do you add cream/sugar to it?
Do you have a favorite brand of coffee(as I know some of you prefer Dunkin' Donuts)?
As always, I'm posting the links for the games and some of the coffee mentioned in this post:

Picture of the Folgers Brazillian Blend captured from Folgers.com.  The IHOP "Never Empty Coffee Pot" picture captured from IHOP.com.
Posted by coffeewithgames at 1:22 AM