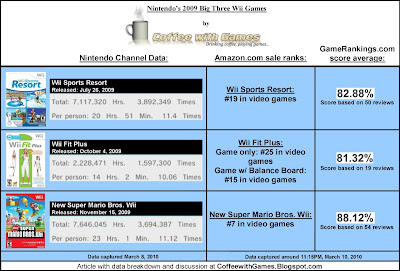 Thoughts:
9 weeks!  Amazon.com hasn't had Wii Fit Plus w/ Balance Board in stock for the last 9 weeks when I've checked for it.
Being curious as to when/if they were getting it back in stock, I contacted Amazon.com and was told they have sent a request to the "manufacturer", in this case Nintendo, and that Amazon.com should have Wii Fit Plus w/ Balance Board back in stock within 20 business days.

If they get it back in stock at the end of March, that will be nearly three full months that Amazon.com will have been out-of-stock of Wii Fit Plus w/ Balance Board.

Something interesting that was reported(GoNintendo) and confirmed(VGChartz) last week is that a new Wii bundle is being sold at Wal-Mart.
The new bundle includes the Wii

accessory with the regular Wii Remote

.  The price for the new bundle is $199.99, essentially giving buyers of the bundle Wii Sports Resort for free.
I was in a local Wal-Mart this past Saturday morning and saw the bundle sitting on the shelf and a customer purchase one of the bundles, while I was in electronics.

I'm glad to see Nintendo getting WM+ out to more Wii owners, and I guess it's a sign they are going to try and make it a new standard of control for Wii games.

Question:
Do you think Nintendo is going to start including a WM+ accessory with every Wii system that is sold, as they are doing with the Wii bundle currently at Wal-Mart locations?

If you're interested in any of the games or accessory, you can click the images below to see new and used prices for them on Amazon.com:

Posted by coffeewithgames at 12:00 AM