The Wii's Most Played FPS by "Total Hours" Is? 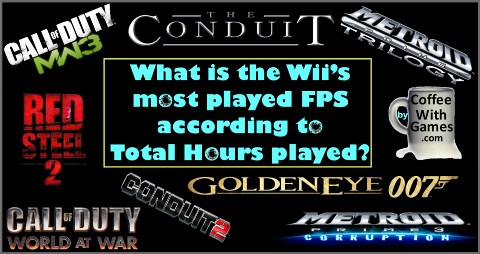 The Roast
According to one "professional" reviewer for Modern Warfare 3 on the Wii, "The words 'Wii' and 'online multiplayer' aren't used in the same sentence very often...".
Call of Duty: Modern Warfare 3 released 2 weeks ago, and I have been playing it a good bit since I received it.
The Wii has single-player focused FPS games like Metroid Prime 3: Corruption which lack multiplayer of any sort, and the more online multiplayer focused FPS games like the Call of Duty games. While the Wii may not have as many FPS games as the PlayStation 3 and Xbox 360, it has had at least one FPS released every year with online multiplayer since 2007.

What is the most played Wii FPS according to "Total Hours" played, as reported through the Nintendo Channel, and does it have online multiplayer? Can you guess it before seeing the answer? Let's take a look! 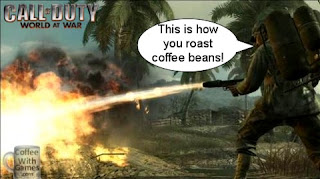 Coffee Beans
Call of Duty: World at War is the Wii's most played FPS game, according to the "Total Hours" reported on the Nintendo Channel. World at War was released on November 11, 2008 for the Nintendo Wii and was the first Call of Duty Wii game to have online multiplayer.
The game was developed by Treyarch, and published by Activision. It received an ESRB rating of "Mature" with "Blood, Strong Language, Violence" listed as content for parents and gamers to be aware of. World at War does have a "content filter" that allows players to have certain violent scenes and some language removed from the single-player campaign, if they wish to enjoy it without all the "Mature" content.
The data displayed in the image below is for game-play hours reported from Wii owners, again through the Nintendo Channel, over the last 3 years; with 1,105 days possibly reported. 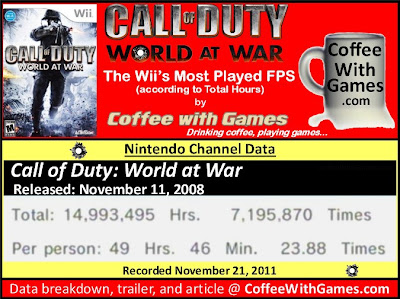 The Brew
Call of Duty: World at War now has 301,334 Wii owners that have reported data through the Nintendo Channel over the last 3 years.
Wii owners playing World at War have averaged 2 Hours 5 Minutes for each session/day they sit down and play the game. The nearly 15 million "Total Hours" of game-play reported are equivalent to over 1,700 continuous years of game time. That's 24 hours a day, 7 days a week, 365 days a year for 1,711 years of nonstop FPS action.
While World at War released with a MSRP of $49.99, you can now find the game on Amazon.com for under $30 HERE, and GameStop.com for under $20 HERE.

Caffeinated Thoughts
To quote IGN's Modern Warfare 3 Wii reviewer again, "The words 'Wii' and 'online multiplayer' aren't used in the same sentence very often...". While that quote is perhaps true of general video game sites like IGN, I think it's only from the lack of understanding that there is a Wii FPS audience, and one that enjoys the FPS genre very much.
If you are a new Wii owner and perhaps looking for a first-person shooter with a World War II settting, I would suggest Call of Duty: World at War.  I have played through the game's single-player campaign twice, beating it once on Veteran; and I enjoyed the story very much.  Below is a brief trailer for World at War that shows how Activision marketed the game:

While the image above shows my reported play-time with the Wii version, it doesn't show the many hours I spent playing World at War on the PS3 with my friend Keith, from RespawnAction.com.  The Wii version lacked the multiplayer Zombie mode, and you can read how I came to own the PS3 version of the game HERE, if you missed it.

Questions
Have any of you played any version of Call of Duty: World at War?  If so, did you enjoy the game and do you perhaps still find yourself playing it?
Are any of your surprised that World at War is the most played Wii FPS by Total Hours, or did you guess it before even seeing it?

You can see prices for the PS3, Wii, and Xbox 360 versions of the game on Amazon.com linked below:

Posted by coffeewithgames at 1:40 AM