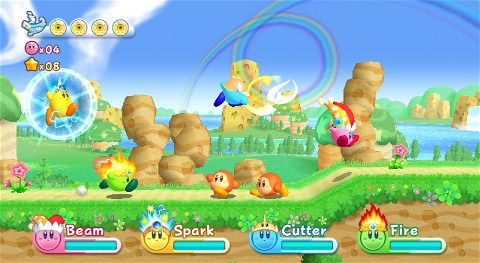 Coffee Beans
On January 21, 2010 I published an article titled, "A Serious Nintendo Wii Problem".  In the piece, I wrote about how Nintendo could not keep New Super Mario Bros. Wii in stock at stores, and I showed how six of the largest retailers in the United States were "out-of-stock" of the game during the holiday season of 2009.

Nintendo just released Kirby's Return to Dream Land for the Wii on October 24th.  The game features cooperative play for up to four players, just like New Super Mario Bros. Wii, and it has received pretty good review scores overall.
We are just now getting into the 2011 Christmas holiday season, and one site is currently sold out of Kirby's Return to Dream Land.  Which site is sold out?  Let's take a look!

Caffeinated Thoughts
When I saw this tonight surfing Amazon for video game deals, it really jumped out at me.  It reminded me of the New Super Mario Bros. Wii issue from 2009, and early 2010; and it makes me wonder if Amazon.com itself and/or Nintendo is responsible for the game not being in stock.
How is it possible, again, that a Nintendo game released basically during the holiday season is not available for purchase directly from the world's largest online retailer?  I honestly have no idea.


Questions
If any of you have been playing Kirby's Return to Dream Land, is it a game you would recommend to other Wii owners that have enjoyed past Wii titles like New Super Mario Bros. Wii, Kirby's Epic Yarn, and even Donkey Kong Country Returns?
If you don't own Kirby's Return to Dream Land yet, is it perhaps on a Christmas list for any of you?


If any of you are interested in Kirby's Return to Dream Land, you can find the game at GameStop.com and WalMart.com linked below:

Posted by coffeewithgames at 1:29 AM