Coffee Beans
Wal-Mart just released their Black Friday ad, so shoppers can start sitting in lines now!  Okay, maybe not now.  Shoppers can start planning on what they are interested in though.
Take a look at the image below that shows some video game deals Wal-Mart will be offering. 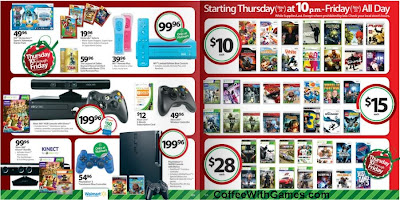 Filtered Thoughts
Seeing the PlayStation 3 bundled with two games for under $200 I think is a great deal, and the Wii console being under $100 will probably do extremely well also.  Being that I don't own an Xbox 360, I would have been more interested in seeing the Arcade version discounted down around $150, and perhaps with a game or two bundled in.
As for the video games being offered, Shaun White Skateboarding for only $10 on the Wii stood out to me, because of the Balance Board controls the game has and the fact I have enjoyed my time with Shaun White Snowboarding: Road Trip.

Questions
Do you see any video game deals that you won't be able to pass up, and perhaps you are reading this on your iPhone while driving to Wal-Mart right now with your sleeping bag and tent?
If you already own a lot of the games shown, are there any you would really recommend others picking up at the discounted prices?
Posted by coffeewithgames at 2:54 AM