Coffee Beans
Call of Duty: Modern Warfare 3 was released this past Tuesday, November 8, for all the current generation home consoles.

The game was developed by Infinity Ward and Sledgehammer Games, and published by Activision.  The Wii version of MW3 was ported to the Wii console by Treyarch, and it is the first Modern Warfare title to be released day one on the Wii along with the other console versions.

The game received a "Mature" rating from the ESRB with "Blood and Gore, Drug Reference, Intense Violence, Strong Language" listed as content for gamers and parents to be aware of.

I played some of Call of Duty: Modern Warfare 3 on the Wii a few days last week, so what are my initial impressions of it?  Let's take a look!

The first thing I did before firing one bullet in Call of Duty: Modern Warfare 3 was to find the control settings.  Once finding them, I adjusted my "Dead Zone" making it slightly smaller than the default setting, but other than adjusting the "Dead Zone" all the other controls were left at default settings.
I have played through four of the single-player campaign's levels.  At one point in a level I said, "I feel like Jack Bauer!"  Why did I feel like Jack Bauer?

Well, if you don't know who Jack Bauer is, he is/was the star character of the television series 24.  He was shot at a lot, and was placed in crazy scenarios all the time.  As I was dodging bullets(and taking some) in one level, it reminded me of 24.

Not only did the dodging of bullets and taking out enemies remind me of 24, but it appears to me that the writers/level designers for Call of Duty: Modern Warfare 3 were fans of 24, because two out of the four levels I have played so far seem like they were taken directly from 24's seasons, and put into Modern Warfare 3's story. 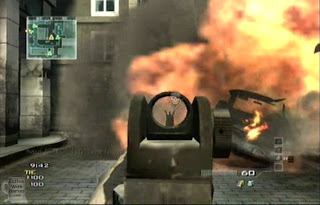 Mrs. Coffee watched me play a few of the levels.  I was battling an enemy military vehicle at one point, and when I finally took it out she said, "Oh, that's really cool!", in reference to how it was destroyed.

As I was wrapping up my time with the game that night she said, "Well, one thing the game is definitely not lacking is action.", and I have to agree with her.  While my impressions are off just a few of the first levels, if you like movies that have a lot of action sequences and you enjoy FPS games, you will probably find yourself enjoying Call of Duty: Modern Warfare 3's single-player campaign as well.

I have enjoyed my time in the levels and I think the game runs well, especially with so much happening in the levels.  The game-play controls are solid and I have not had any issues with them, and being able to adjust the bounding box/dead zone is a great customization option that World at War was lacking. 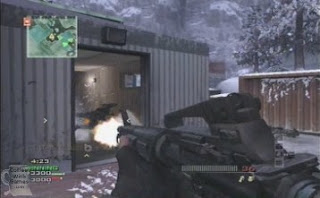 Have I played any of Modern Warfare 3's online multiplayer?  I have.  I am currently rank 7, and have played right about an hour.  A few matches have had some lag issues and I have not been playing with my Wii directly connected to my USB LAN adapter, but overall it seems to be running pretty well over the WiFi.

From what I can see right now, MW3 Wii has 11 different multiplayer match types to choose from:
Not all of the match types are open to play right away, and access to them has to be unlocked.  So far I have only played matches from "Team Deathmatch" which can be played with 6-10 players at a time.

I have enjoyed my time in the matches, even though most have resulted in me getting absolutely destroyed.

Caffeinated Thoughts
Now, I know some of you may be thinking, "Coffee, you failed on your new year's resolution didn't you!"

Actually no, I haven't.  I was very fortunate last Wednesday to receive a copy of Call of Duty: Modern Warfare 3 for the Wii from Activision.  I will continue providing coverage of the Wii version over the next several weeks, if not months, and sharing my impressions of the game with you.

If any of you own Call of Duty: Modern Warfare 3 on the Wii, and will be playing it online, my MW3 friend code, or "Ally Code" as the game labels it, is 0359-9573-5494.  If you add me to your list, make sure to leave a comment letting me know, and also feel free to leave your MW3 "Ally Code" in the comments below.

Questions
Did any of you purchase Call of Duty: Duty Modern Warfare 3?  If so, which version did you purchase and have you been enjoying your time with the game?

If any of you are interested in Modern Warfare 3, you can see prices for the PS3, Wii, and 360 versions on Amazon.com linked below: