Quick Brew Info:
UFC Undisputed 2010 was released on May 25, 2010, for both the PS3 and Xbox 360.  The game released with a MSRP of $59.99.  UFC Undisputed 2010 is a continuation of the Ultimate Fighting Championship game series that was originally started on the Sega Dreamcast. 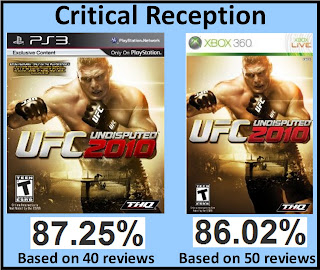 (Agree? Or, disagree?)
Thoughts:
I own the original Ultimate Fighting Championship on the Sega Dreamcast, and I downloaded the demo for UFC Undisputed 2010 on my PS3.

While you may be thinking those numbers are good(and I do myself), those numbers were a significant decrease in the number of units sold compared to UFC Undisputed 2009.  PASTAPADRE has an excellent article discussing the sales numbers from last year to this year, and says, "THQ saw a year-over-year drop of 59% for the first month of UFC."

Here's footage from a match I recorded playing the demo, and some pictures from UFC Undisputed 2010's official page as well:


Is UFC Undisputed 2010 a game you would recommend to other PS3 and Xbox 360 owners?  Or, would you recommend them find an older version of it instead?

If you are interested in either the PS3 or the Xbox 360 version of UFC Undisputed 2010, you can see prices for both on Amazon.com listed below:

Posted by coffeewithgames at 12:27 AM