(click chart to enlarge)
Chart Info:
The chart above shows the sales ranks for Red Dead Redemption on the PS3 and the Xbox 360, with data captured between June 1, 2010 through June 30, 2010.
13 days had data recorded from them at different times, with a total eighteen sales ranks input on the chart. 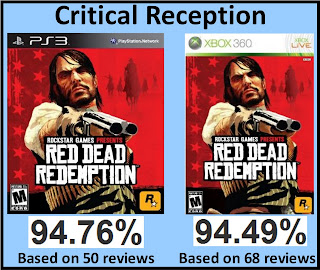 (Agree? Or, disagree?)
Thoughts:
I think it is safe to assume that both Red Dead Redemption versions will be in the NPD "Top 20" again for June, based off the Amazon.com data.

The NPD sales numbers for June should be reported this Thursday, and I think it will be interesting comparing the Amazon.com sales ranks, with how Red Dead Redemption performs in the NPD numbers.

If you have not seen the comparison shots, you can take a loot at them HERE: http://www.neogaf.com/forum/showpost.php?p=21355476&postcount=704

I still don't understand why it seems developers have issues developing/porting games to the PS3 with the same frame-rate and graphical fidelity of the Xbox 360 versions.

If you still haven't seen anything of Red Dead Redemption, here's a video of two trailers from the game that I combined into one:


Questions:
Do you think Amazon.com's sales ranks will line-up with the NPD numbers when they are announced Thursday?
I think that both versions of Red Dead Redemption will probably be back in the "Top 10" again, what do you think?

If you already purchased Red Dead Redemption are you still playing the game, or have you moved onto something else already?


If you haven't purchased Red Dead Redemption yet, you can see prices for both versions on Amazon.com below:

Posted by coffeewithgames at 6:07 PM