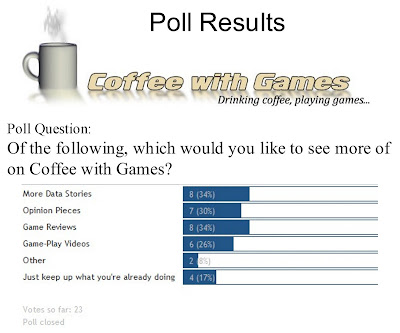 (click image to enlarge)
The poll closed with 23 people voting, but I had it set up, where each person could vote for multiple answers if they chose to do so.
In all, 35 votes were cast.
As the picture shows, both "More Data Stories" and "Game Reviews" tied for 1st, with 8 votes each.
"Opinion Pieces" was a close 2nd, with 7 votes.
"Game-Play Videos" was 3rd, with 6 votes.
"Just keep up what you're already doing" was 4th, with 4 votes, and "Other" was last with 2 votes.

The poll above, ended on April 11, but I never really addressed the results of it.
I have been thinking about different ways to implement ideas into my blog.  One of the things I have been thinking about, are game reviews.
I have been reading many more game reviews than normal in the last few months, getting ideas of what I like and don't like in review formats.
My first "official" review of sorts, will be going live this Friday, May 14.

Also, I put up a post, "Coffee with Games Poll Participation", and said, "I'm always open for suggestions and feedback..."

Questions:
If you didn't participate in the poll, do you have any suggestions for things you would like to see me do on the blog?  I can admit, I am slow when it comes to implementing ideas on the blog.  As you may have noticed, I don't post what I call, "rehashed" news stories on my blog, by themselves.  Each post, I try to keep original, with content not found on other sites/blogs.

If you have any suggestions, email me and let me know, or leave a comment on this post.
If you suggest something, and you don't see it implemented right away, it may be, because I'm thinking of a way to implement it, but in a way to make it different from other sites/blogs.

I do take suggestions seriously, and I greatly appreciate the feedback and discussions we have had on different posts so far.

Again, thank you all for the comments and feedback.  I hope to keep my posts fresh, like the pot of Folgers French Roast that I'm brewing right now!

Sincerely,
Scott Mullins
aka CoffeewithGames
Posted by coffeewithgames at 3:59 PM