So, we started planning for a Nintendo themed party!

Take a look at some pictures, of my personal favorite, the cake/cupcakes that Mrs. CoffeewithGames(my wife) made for our son's party! 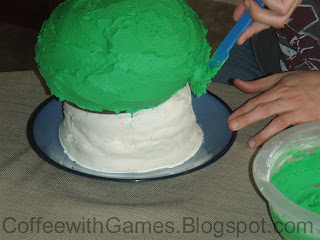 Icing the 1up Mushroom birthday cake 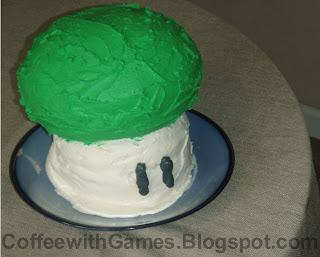 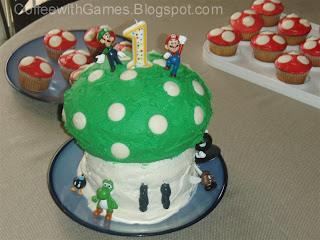 The 1up cake, now joined by Super Mushroom cupcakes, and decorated with Mario, Luigi, Yoshi, a Bob-omb, a Bullet Bill, and a Winged Goomba, from this view. 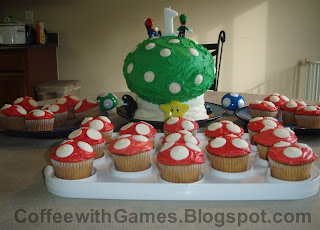 The back of the 1up Mushroom cake, with a star hidden, almost like in Super Mario Galaxy! 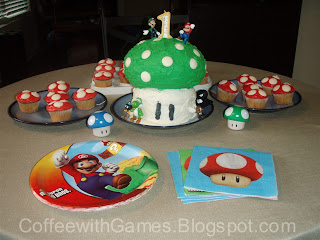 Nintendo themed plates and napkins
Thoughts:
We had a lot of fun trying to think of things for our son's party, and my wife had a lot of fun making the 1Up Mushroom birthday cake, as well as the Super Mushroom cupcakes.
The cake and cupcakes were(and are) delicious.
I will try to post more pictures of other decorations from the party, later this week!
Questions:
I'm not a cook.  If it can't be poured into a bowl and milk added to it, or heated in the microwave, more than likely, I won't attempt to make it(pancakes are the exception).
If you cook, have you ever attempted to cook anything Nintendo or gaming related?  If so, was the final outcome of the food design, how you thought it would be?


Below are the cake pans my wife used to make our son's 1Up Mushroom birthday cake, and the Nintendo figures we used to help decorate the cake:
Posted by coffeewithgames at 2:40 AM