Wednesday night, I went to a friend's house(Cansecoholic) and he had a box of Folgers Coffee Singles

.
Basically, it's coffee in a tea bag!  I did try it, though by the time I sat down to drink it; it was already lukewarm because I was watching my son crawl all over their house.
The idea, with Folgers Coffee Singles, is for brewing the coffee right in the cup; quickly and easily.

I have random thoughts/questions about the game industry, but I don't express them often.
So, if I have a thought/question that is gaming related, I will start posting some as a "Quick Brewed Thought" or "Brewed Thought", depending on length.
I will highlight the "Thought", so it stands out, but I will also provide any "analysis" or extra thoughts beneath it.

Today's is a "Brewed Thought":
Why didn't EA develop and publish Skate 3 also for the Nintendo Wii?
I think they missed a good opportunity.
This past Tuesday, Skate 3 was released for the PS3 and the Xbox 360, but not for the Wii

.
I emailed EA back in March asking if a Wii version of Skate 3 was going to be released.
I still have not received a reply from them about it(not holding my breath for a reply either).

Now, you may be thinking, "Why should EA have released Skate 3 on the Wii?"

was released in November 2008 for the PS3

Well, just 6 months after it released, Ubisoft announced a sequel for Shaun White Snowboarding Road Trip.
The big difference with the sequel though, it was going to be a Wii exclusive title only.
I would think, if the PS3 and Xbox 360 versions of the game had sold well, those consoles would have gotten the sequel as well, but they didn't.

in November 2009.
When the first months NPD numbers were reported, the Wii version of Tony Hawk: RIDE had sold more than the PS3 and Xbox 360 versions, combined.

I even did a blog post, before the NPD numbers were reported, titled, "Dumb, Dumber, Dumbest: Tony Hawk: Ride, Console Conversations".
Now, Tony Hawk: RIDE didn't support the Balance Board because it had its own skateboard peripheral, but I believe Wii owners were already familiar with the idea, from past games; like Shaun White Snowboarding Road Trip and even Skate It

, both of which were compatible with the Wii Balance Board.

Also, take a look at skateboarding/snowboarding games on the Wii, and their play-time data: 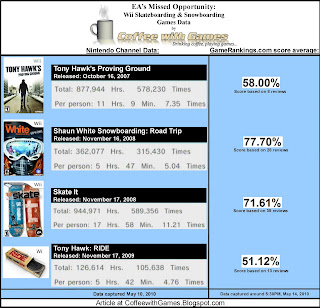 (click image to enlarge)
I think the data shows that Wii owners play skateboarding games, even ones that are overpriced and don't review well.
Also, I find it interesting that Skate It has the most "Total Hours" currently reported out of all the skateboarding games with data on the Wii.  Perhaps, it is because Skate It is compatible with the Wii Balance Board?
Questions:
If both Shaun White Snowboarding Road Trip and Tony Hawk: RIDE sold better on the Wii, than the other consoles, why do you think EA did not release Skate 3 on the Wii with Balance Board support?
Do you think EA missed a good sales opportunity by not releasing Skate 3 on the Wii?  Or, do you think Wii owners would not have been interested in the game, and releasing Skate 3 just on the PS3 and the Xbox 360 was the right move?


I don't know why EA chose to release Skate 3 on the PS3 and the Xbox 360, but not on the Wii.
I do think EA missed an opportunity with Skate 3, by not releasing it on the Wii at the same time as the other consoles.  I wonder who made the decision for what consoles the game would be released on, and how they made that decision.


If you are interested in Skate 3, or Skate It, you can see new and used prices for them below: