Coffee Beans
What is an "Instant 'Coffee' Video Game Award"? I'm glad you asked! I write many data posts and usually put many hours into each one reading about the games, looking for a trailer and/or game-play video, and often getting distracted reading about the developers and publishers of the games.
While I do use older data reports as templates and to keep the layouts similar, every word and number in each data post is typed out and not copied and pasted from older data posts.


So, back to this "Instant 'Coffee' Video Game Award". According to Dictionary.com, instant coffee is, "dehydrated coffee that can be made into a drink by adding hot water; 'the advantages of instant coffee are speed of preparation and long shelf life.'" While instant coffee isn't part of this instant giveaway, it might be in future giveaways.

What about the "Video Game Award" part of the title? It simply means this award is video game related.
Being that some have defaulted to referring to me as "Coffee" or "Mr. Coffee", that's where the "Coffee" part comes from in the title with quotes around it.
I have done a few contests and giveaways over the last few years and the winners have usually been selected by dropping the entry names into a coffee container, shaking it up, and then drawing the winner out. With an "Instant 'Coffee' Video Game Award" though, the award is instantly awarded to the first person that responds either knowingly/unknowingly, with no coffee container drawing necessary.


Who is the winner of the first "Instant 'Coffee' Video Game Award" and what did they win, and more importantly how did they win it? Make yourself some coffee, instant or not, and let's take a look! 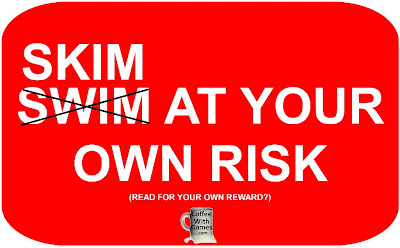 The Brew
In a past data report, I posted a comment about giving an item away to the first person that sent me the game's professional review score average, but I did not specifically highlight the giveaway in the post. Most recently I put a repeat error in a data post. Why?
Being that I put a lot of time into each data post, I'm always interested how much each posts is actually read by readers, versus how much of them are just skimmed. So, to check how much attention is paid to what I write, I decided to try something new as a test. If you missed the "Is Gotham City falling to pieces? LEGO Batman: The Videogame Hours Report" post from last Thursday, or if you read it after last Thursday, you probably missed a repeat spelling mistake in the post.


What was the repeat error in the post? Instead of spelling Gotham City as it should have been throughout the story, I spelled it incorrectly as "Ghotham City" throughout the entire post including the title line (which you can still see the html link shows it as), except in one spot, the highlighted yellow section. I even mispelled it in the initial data image, with a backup image in waiting if/when somebody pointed it out either here on CoffeeWithGames, or on other sites that post up my stories.


One CoffeeWithGames regular reader/commenter did not miss the repeated spelling mistake though, and made a point to bring it up in the comments in a nice, civil, simple manner within 12 hours of the story being posted. That reader was KnucklesSonic8, who has writes for his own site WiiloveIt.com.
What does KnucklesSonic8 get for telling me about a mistake that was repeated throughout a data report, that probably appeared to be just a simple, stupid, repeat mistake? He gets his choice of a video game, either Space Pirates and Zombies or World of Goo through the Steam service.


Caffeinated Thoughts & Questions
Just remember that if you are going to enter the darkened coffee story waters, you should skim at your own risk of missing free stuff; but definitely read for your own reward! If you ever see another mistake in a post that may be honest (or not), feel free to leave a comment about it, or email me at Scott@CoffeeWithGames.com.
Did any of you perhaps notice the mistake in the LEGO Batman post before his comment showed up, but just didn't say anything? Also, he hasn't picked which game he wants yet, so if you have played both Space Pirates and Zombies and World of Goo, would you recommend him one more than the other?
Posted by coffeewithgames at 4:50 AM