THIS is what the 3DS XL should have looked like.

Coffee Beans
I reserved the original 3DS model, but then canceled my pre-order on it and I still have not purchased a Nintendo 3DS system. Nintendo announced a new 3DS model, the 3DS XL, just over a week ago now.
Was the new 3DS XL model shown what I was hoping for, and were the announcements at/since E3 for the 3DS system enough to get me excited about Nintendo's 3D handheld system? Maybe it was Capcom's Monster Hunter 4 3DS reveal today? Actually, neither one yet.

What should have Nintendo's 3DS XL, or even just a new 3DS model in the future, look like that would get me interested in the console, perhaps enough to even buy one for if/when Monster Hunter 4 releases in the U.S. next year?
Brew yourself some coffee, and let's take a look at two 3DS XL redesign options, that are better than the Nintendo 3DS XL's current design...at least in my caffeinated opinion. THESE are what the 3DS XL should have looked like!

The Brew
Coffee's 3DS XL (lower) Model. It would have the same screen size as the 3DS XL, just with two circle pads instead of only one:

Coffee's 3DS XL (top) Model. It would have the same screen size as the newly announced 3DS XL system, but with two top circle pads instead of only one:

Did you notice the new power button location? Not only would these new 3DS XL models have two circle pads built into the system, but the system's "POWER" button has been relocated as well, clearing up the space beneath the new circle pad and/or ABXY buttons.

Caffeinated Thoughts
Why would this be a better design? Well, the additional circle pad makes the already announced 3DS XL Circle Pad Pro a non-issue, and new shoulder buttons will be able to be implemented as well. Because, in the design world anything is possible, even though it might not be probable.
I think a 3DS system with two circle pads being standard, would give the 3DS a new control option for developers opening up more opportunities for them, not limiting them.


I personally think Nintendo has missed a market opportunity with the 3DS XL model, by leaving off a 2nd Circle Pad. When Nintendo announced the 3DS XL last week during their Nintendo Direct conference, I thought my eyes were fooling me and the empty space on the "new" system would magically reveal a 2nd Circle Pad. Unfortunately, that did not happen.
If Nintendo had shown the new 3DS XL system that looked like either of the above, it would have immediately moved the system to the top of my consoles wish list. I would have seen it as Nintendo being serious about providing better/more control options, instead of telling consumers to duck tape attachments to the existing 3DS systems for better/more control options.
In short, for skimmers... 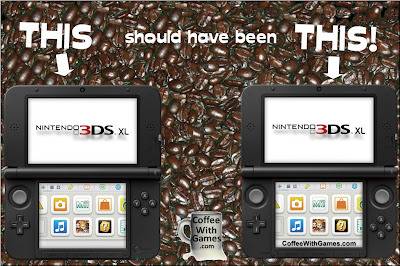 Questions
Are any of you non-3DS owners, perhaps like me, that have been holding off on purchasing a 3DS system, because you are waiting on a new 3DS system design, and if so, was the 3DS XL announcement and design what you had been waiting for? Would either of the "new" 3DS models I showed above, have been what you were looking for in a new 3DS system instead of what Nintendo has done?
If you already own a current 3DS model, do you plan on buying the new 3DS XL model when it releases next month?

If you are interested in the 3DS XL, you can see some picture links below for the "Red" and "Blue" systems being offered:

Posted by coffeewithgames at 1:43 PM