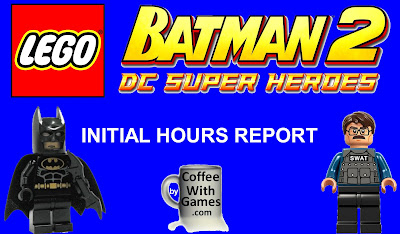 Coffee Beans
LEGO Batman 2: DC Super Heroes was released on June 19, 2012 for the Wii with a MSRP of $39.99. The game was developed by Traveller's Tales Games, and published by Warner Bros. Interactive Entertainment. It received an ESRB rating of "Everyone 10+" with "Cartoon Violence" listed as content for gamers and parents to be aware of.

How many hours have U.S. Wii owners reported running around LEGO Gotham with the Dark Knight in LEGO Batman 2: DC Super Heroes since the game released? Brew yourself some coffee, and let's take a look! 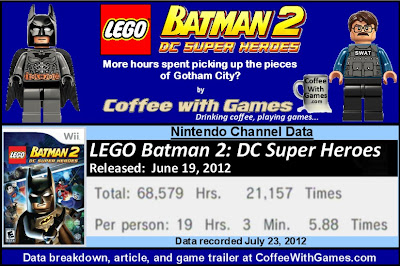 The Brew
LEGO Batman 2: DC Super Heroes has approximately 3,598 U.S. Wii owners that have reported data through the Nintendo Channel, with 34 days possibly reported as of this report. The game's average play-time per day/session reported on its debut is 3 Hours 14 Minutes.

Caffeinated Thoughts
I haven't played either of the LEGO Batman games, but with Bean 1 just getting a Hot Wheels Batmobile car and being able to hum the original Batman television show tune the games will probably end up on our list at some point.

If you have not seen any footage of LEGO Batman 2: DC Super Heroes, you can watch one trailer below while sipping on some coffee:

I always find it interesting to see how fast games debut, and seeing this game debut with just 34 days possibly reported and already having an average just over 19 hours "Per person" is really good compared to most other Wii games. I don't know how many hours LEGO Batman 2 is supposed to take to complete, but the first LEGO Batman Wii game has an average play-time of just over 36 hours, so I would imagine most owners will get a solid number of hours out of LEGO Batman 2 just based on these early hours reported and averaged.

If you are interested in LEGO Batman 2, you can see different versions of the game linked on Amazon.com below:

Posted by coffeewithgames at 5:07 AM