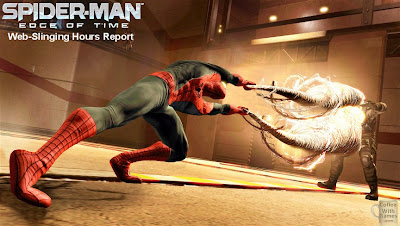 Coffee Beans
Is Spider-Man amazing? According to his latest movie's title, The Amazing Spider-Man, he is. I personally find it amazing how much money each movie has made, but that's a topic for another day, maybe on another site.

From my count, the Wii has had six video games with "Spider-Man" in their titles. At least two of the games have been based directly around Spider-Man movies; those being Spider-Man 3 and the recently released The Amazing Spider-Man.

Today, we're taking a look at one of the Spider-Man Wii games not directly based on a movie though, Spider-Man: Edge of Time.

Spider-Man: Edge of Time was released on October 4, 2011 for the Wii with with a MSRP of $49.99. The game was developed by Beenox and published by Activision, and received an ESRB rating of "Teen" with "Mild Language, Suggestive Themes, Violence" listed as content for gamers and parents to be aware of.

How many hours have Wii owners spent web-slinging in Spider-Man: Edge of Time since the game released? Brew yourself some coffee, and let's take a look!

The Brew
Spider-Man: Edge of Time has 9,636 U.S. Wii owners that have reported game-play hours through the Nintendo Channel, with 286 days possibly reported. The game has an average play-time per day/session of 2 Hours 14 Minutes, which I think is interesting because it is just about the length of each Spider-Man movie that has released since the original Spider-Man in 2002.

What did the critics and customers think about Spider-Man: Edge of Time, and do the review scores show a big difference between the customers' and critics' enjoyment from the game?

I would say an almost 25% higher customer review score average over the critic, is a pretty significant difference.

Caffeinated Thoughts
I enjoyed the Spider-Man universe when I was younger, and when writing this post I remembered that I had played a handheld Spider-Man game when I was much younger. After doing some searches, I found the portable Spider-Man game I poured many hours into as a child.
The second Spider-Man game I can remember playing is Spider-Man: The Movie, which I purchased from Babbage's the day it released at our local mall for my GameCube. It only took me a few days of playing the game before I finished it though, so I returned it to Babbage's for a full store credit, or refund.

Since the original Spider-Man movie and its sequel though, I haven't really followed much on the Spider-Man games. With The Amazing Spider-Man movie and video game both releasing within the last month, I decided to take a look at the data for the other Spider-Man Wii games, and the trailer for Spider-Man: Edge of Time is what caught my attention. You can see it below:


Why did the trailer catch my attention? First, it starts off early by asking an important question that has been debated for at least a few thousand years now, "What happens after we die?" Something to think about for sure.

It also seems to show that Edge of Time has a different setting from the typical web-slinging Spider-Man games, perhaps with more inside battles and not as much open web-slinging through the city? At least that was my impression from watching the trailer.

As for the reported data, I think the average of just over 8 hours per Wii owner perhaps shows this is a shorter Spider-Man game, perhaps like the original Spider-Man: The Movie? I'm not sure if I would put this on my "Wish List" based on the reported average hours and being that I don't follow the Spider-Man universe a whole lot anymore, but seeing the customer review score average for it would probably make me take a second look at it if I spotted it for around $10 now.

Questions
Have any of you played Spider-Man: Edge of Time on the Wii, or perhaps another console? If you have played the Wii version, are the motion controls implemented well in the game?

If any of you are interested in Spider-Man: Edge of Time, you can see links to the different console versions below:

Posted by coffeewithgames at 7:39 PM