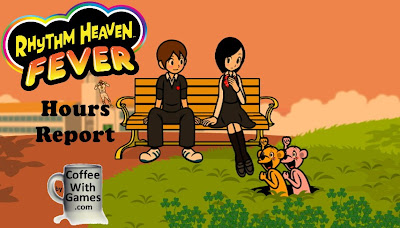 Coffee Beans
Rhythm Heaven Fever was released on February 13, 2012 for the Wii in the U.S. The game was codeveloped by TNX and Nintendo's SPD Group No. 1, and published by Nintendo. It released with a MSRP of $29.99, and the game received an ESRB rating "Everyone" with "Mild Cartoon Violence" listed as content for gamers and parents to be aware of. 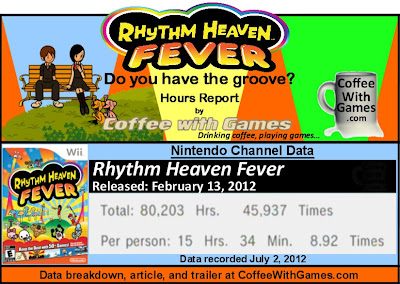 The Brew
Rhythm Heaven Fever has approximately 5,149 U.S. Wii owners that have reported game-play data through the Nintendo Channel, with 140 days possibly reported. The game's average play-time per day/session is 1 Hours 44 Minutes.

Caffeinated Thoughts
"What an odd, strange, crazy looking game!", is what I thought after watching a trailer for Rhythm Heaven Fever. If you have not seen any footage from the game, here is a trailer that might give you an idea of what you can expect:

I have not played Rhythm Heaven Fever, but after seeing the trailer for it this past week, it looks like it could be a lot of fun.

As for the hours reported, I think the game's average reported already being more than 15 Hours "Per Person" is really good for the game, and shows that Wii owners are definitely playing the game a good bit.

If you are interested in Rhythm Heaven Fever, you can see links to the game on Amazon.com and GameStop.com below:

Posted by coffeewithgames at 9:45 AM