SUGGESTION: Drinking a cup of coffee before, during, and after reading this article may help with understanding it...maybe not.

Over the last several weeks, I've been collecting the play time data on certain games off of the Nintendo Channel.

I've been following games I consider to be targeted toward the 'casual' and 'core' gaming audiences.

On the picture, EA Sports Active is the first one shown, which I place in the 'casual' category as I think the game is geared toward the new casual gamers. While looking at the data, remember that Electronic Art's has reported that EA Sports Active has sold more 1.8 million copies.

I was having a bit of trouble finding the Punch-Out!! sales number, if anybody can provide a link, that would be greatly appreciated.

As of now, I'll assume that VGChartz.com is close to the right numbers for Punch-Out!!'s sales. Punch-Out!! is listed as selling 420,000 units in North America.

The Conduit is reported to have sold/shipped around 150,000 units since it's release.

Now for the play time data: 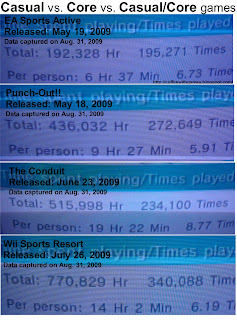 Based on the numbers shown and units reported sold, EA Sporst Active has the least amount of play time, which I would suspect from a casual title, but it also currently has the most in sales out of the four games.

If you're wondering how these numbers are collected by Nintendo, I did contact Nintendo and asked them that question myself.

The response I received was, "The data for the Nintendo Channel is collected from players in North, Central, and South America. Basically, if you look at the list of countries in the Country settings in the Wii Menu, those countries are the ones who would be participating. The totals from each player are reported when they access the Nintendo Channel if they've opted in to sharing their information). Note that if a player doesn't connect online or never opens the Nintendo Channel, their playing stats are never uploaded to us. - Nintendo customer service rep"

Based on the response and some quick math, we can see approximately how many users of these games have reported the data, and the approximate percentage reporting from the overall sales:

29,015 is the number of people that have bought EA Sports Active and actually signed into the Nintendo Channel and allowed Nintendo to collect their play time data from games.

Assuming the 1.8 million units sold is correct, less than 2% of owners of EA Sports Active are reporting their play time data.

Based on the VGChartz.com's sales numbers, Punch-Out!! has sold approximately 420,000 units in North America. Based on that, it seems that between 10-11% of Punch-Out!! owners are signed up and are having their play time data collected.

Based on VGChartz.com's sales number for The Conduit in North America being at 170,000 units sold, between 15-16% of The Conduit owners are having their play time data collected.

Based off these numbers, it would seem that certain games like EA Sports Active are bought by the now famous 'casual' gamers of this generation, while games like a first-person shooter, The Conduit, are still being bought by 'core' gamers.

*rounded to the nearest whole number

Posted by coffeewithgames at 10:05 PM