On Friday, September 18, it was reported on GoNintendo.com, "...readers from Europe and North America are reporting issues with the Nintendo Wifi Connection.  It appears that something is being updated, or something's gone really wrong.  The 20100 error code is popping up all over the place...".  Even a GoNintendo reader, Totodile, from New Zealand confirmed he received an error message trying to connect to play Mario Kart DS that day.
So, I take it that something went "really wrong", because for some odd reason, the play time hours on the Nintendo Channel weren't updated this week.

All of the games I normally track, The Conduit, Punch-Out!!, EA Sports Active, and Wii Sports Resort are showing the exact same number of hours reported played this week, as they were last week.

Instead of putting up the same exact post and hours from last week, I'm taking a look at how The Conduit, Punch-Out!!, EA Sports Active, and Wii Sports Resort are currently ranked on Amazon.com's video game sales chart.  I'll be including Amazon.com's sales ranks for any game I cover off the Nintendo Channel in future posts from now on.

Take a look(click the image for a larger viewable size): 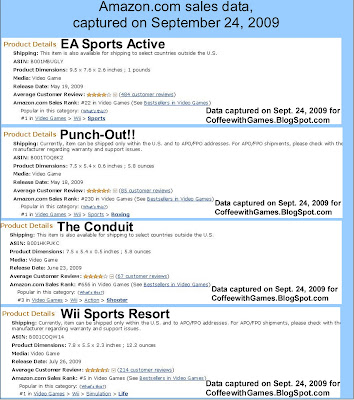 EA Sports Active was ranked 22nd overall in sales on Amazon.com's rank for video games, placing it second out of the four games in overall sales rank. As in previous posts, EA Sports Active has the fewest number of hours reported playing, out of The Conduit, Punch-Out!!, and Wii Sports Resort.

I find it interesting Amazon.com's ranking provides some sales data that reflects placement ranked, if not exact numbers, for how the games are doing compared to each other.

Posted by coffeewithgames at 1:04 PM