Another week has passed, and more hours have been logged into games by the casual and core gaming crowd.

Last week we looked at EA Sports Active, Punch-Out!!, The Conduit, and Wii Sports Resort, and we will continue this week with the same games.

EA Sports Active remains the lowest of the games in total play times reported, while Wii Sports Resort continues it's climb up with total play time approaching one million hours!

Punch-Out!! and The Conduit are still in the middle.

Here are the numbers and the data breakdown. 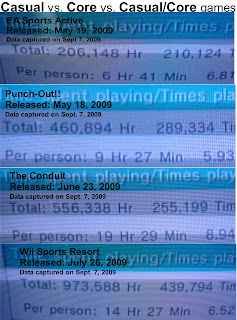 I'll start with the game that has the most "Total:" hours reported playing, it was last week and again this week, Wii Sports Resort.

The Conduit saw the number of people game play data was received increase from 26,693 last week, to 28,546 this week.  A difference of 1,853, an increase of just over 6% in users game play data received.

Last but not least(definitely not least in sales),

Posted by coffeewithgames at 6:35 PM