Kirby Turns One, A Sibling Is Born - Unwinding, Before Moving Forward

Coffee Beans
Kirby's Epic Yarn was released on October 17, 2010 for the Nintendo Wii, with a MSRP of $49.99.  The game took about 2-weeks for its game-play hours to show up on the Nintendo Channel, and I did its initial data report last November which you can read HERE.

Kirby's Epic Yarn was developed by Good-Feel and HAL Laboratory, and published by Nintendo.  The game received an "Everyone" rating from the ESRB with "Mild Cartoon Violence" listed as content for parents/gamers to be aware of.

So, before we head into Kirby's new Dream Land, how many hours Wii owners have spent with Kirby's Epic Yarn over the last year?  Let's unwind one more time and take a look!


The Brew
Kirby's Epic Yarn has about 135,945 Wii owners that have now reported game-play hours through the Nintendo Channel, with 372 days possibly reported.

The game's average play-time per day/session reported is 1 Hour 58 Minutes, which means each time Wii owners are sitting down to play Kirby's Epic Yarn they spend about two hours playing the game.

Filtered Thoughts
Earlier this summer, Mrs. Coffee and I traded/loaned our neighbors Donkey Kong Country Returns for Kirby's Epic Yarn(and I also got Wii Sports Resort).  Mrs. Coffee and I played through Kirby's Epic Yarn cooperatively, and we enjoyed playing through the game together.  While we completed the game together and saw the credits roll, we didn't go back and complete every single level that is unlocked through the campaign, cooperatively.  The game gives players an overall percentage "complete", and Mrs. Coffee and I finished with more than 50% of the game "complete" when we saw the credits roll. 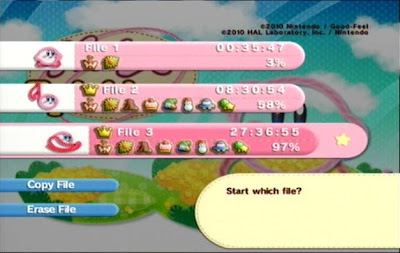 So, as the image above shows, you can probably expect between 7-10 hours of game-play to complete the game's campaign with around 50% of it finished.  As Mrs. Coffee's file shows, if you want to complete the game with 100% of the items found, and all of the levels completed, your hours can be a lot higher if you take your time and play through some of the levels multiple times.

If you missed how Nintendo advertised Kirby's Epic Yarn when it released last year, below is the television commercial for the game:


Overall, I would recommend Kirby's Epic Yarn to families that are looking for a fun 2-player 2-D platforming experience.

Questions
Have any of you played Kirby's Epic Yarn?  If so, do you know what percentage of the game you had completed when you saw the credits roll, and did you perhaps go back to try and complete it with 100% as Mrs. Coffee did?

If any of you are interested in Kirby's Epic Yarn, you can see prices for it on Amazon.com and GameStop.com linked below.  Also, you can see Kirby's newest Wii adventure below, Kirby's Return to Dream Land:

Posted by coffeewithgames at 1:53 AM