Have You Partied? Wii Party Turns One

Coffee Beans
Wii Party was released on October 3, 2010 with a MSRP of $49.99.  On April 25th this year, the game saw an "official" price drop from the MSRP of $49.99, down to a MSRP of $39.99.
The game was developed Nd Cube and Nintendo EAD, and published by Nintendo.  Wii Party received an "Everyone" rating from the ESRB with "Mild Cartoon Violence" listed as content for parents/gamers to be aware of.

How many hours have Wii owners reported partying with Wii Party during its first year?  Let's take a look! 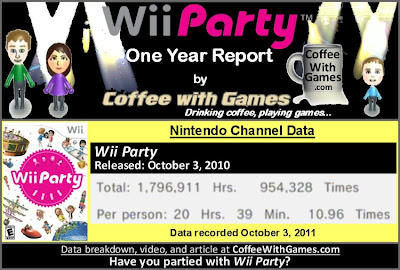 Reported Player Increase Since December 2010
Wii Party has seen an increase of about more 69,411 more Wii owners reporting data since the last report based on data recorded from December 27, 2010.

Average & Total Game-Play Hours Reported
Wii Party now has 1,796,911 Total Hours of game-play reported, which is an increase of 1,553,120 Total Hours since the last report.
The average play-time is now 20 Hours 39 Minutes "Per person"(or console) reporting data, an increase of 6 Hours 51 Minutes.
The game's average play-time per day/session reported is 1 Hours 53 Minutes.


Have I partied with Wii Party?  No, I have not.
I honestly felt that Wii Party was a holiday cash-in attempt by Nintendo last year, instead of them delivering a game that used the Wii and its peripherals in interesting ways.  The reason I thought it was a cash-in, is because the game does not use the Wii MotionPlus attachment in any way, it does not use the Wii Balance Board in anyway, and of course, no online anything.
When some third party developers were able to implement Wii MotionPlus and Wii Balance Board controls in some of their games very quickly, but make them only optional, it just made me think that Nintendo had Wii Party's mini-games sitting around for a few years and threw them together as a holiday release.

What about the reported game-play data?  I think it shows that Wii owners that have purchased Wii Party are really enjoying the game, and the average hours reported "Per person" are more than I was expecting the game would be at this point, as I thought it would hover around the low to mid teens.
Will I ever play Wii Party?  Well, I don't plan on purchasing it, so unless I end up at somebody's house that owns it, and we have a Wii Party party, I don't think I will ever play the game.

Questions
Have any of you played Wii Party, and if you purchased it many months ago is it a game you play by yourself?  Or, is it only one of those games that you break out when family and friends are over?
Also, if you have played any of the Rayman Raving Rabbids Wii games and Wii Party, are they along the same type of "party" games, or aimed at different audiences?

If any of you are interested in Wii Party, you can see prices for it on Amazon.com below:

Posted by coffeewithgames at 2:30 PM