Coffee Beans:
I showed on October 25, just a week after the Netflix Channel released, how many hours Wii owners had reported using the channel during its first week.
On Monday, November 22, Netflix announced new price changes on their existing unlimited plans, and started offering a new "No DVDs" streaming only plan for $7.99.
How many hours have Wii owners spent watching movies and television shows through the Netflix Channel, instead of playing video games since the last report?  Let's take a look! 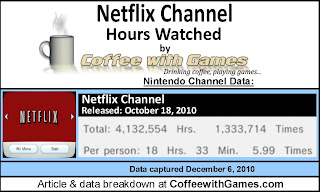 Approx. Number of Wii Owners Reporting Data:
The Netflix Channel now has 222,656 Wii owners that have downloaded the channel, and are sharing their Netflix Channel usage through the Wii's Nintendo Channel.

User Increase Since Last Report:
The Netflix Channel has seen an increase of about 203,028 Wii owners reporting data, since the October 25 report.

Average & Total Video Hours Reported:
The Netflix Channel's "Total Hours" have increased by 4,082,396 hours, since the last report, and it now has 4,132,554 Total Hours reported.
The total average time "Per person" is 18 Hours, 33 Minutes, while the average time per session on the Netflix Channel is just over 3 Hours 5 Minutes.

Sales Info:
Just based off the Netflix Channel's reported users, and assuming each Wii owner is just on the new $7.99 streaming only price plan; Netflix is making at least $1,779,021 per month, from Wii owners.
We already know Nintendo of America's President Reggie Fils-Aime said there were more than 3 million Wii owners using the Netflix service when it was disc based, so based on that alone, they were making more than $27,000,000 a month from Wii owners($324,000,000 a year!).


We are still using our Netflix service, ever since we started our "Free 30-day trial"...I guess that's what trials are meant to do.
We have the Netflix Channel on our Wii, as well as our PS3.  Being that I record a lot of footage from the Wii each week, the PS3 has become default Netflix player in the house.
Questions:
Have any of you, like myself, started a Netflix membership after giving their "30-day Free Trial" a try?
If anybody doesn't have a console, and you are interested in getting one for Netflix use, you can see the consoles on Amazon.com linked below:
Posted by coffeewithgames at 1:32 AM