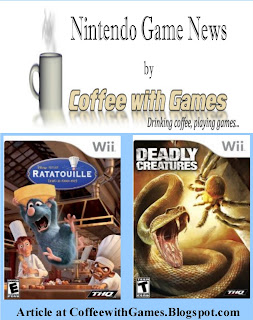 Just about two weeks ago, I broke the news that Metroid Prime: Trilogy Collector's Edition

, and Wario Land: Shake It!

are no longer being published/shipped by Nintendo in North America.

All the games mentioned above are games by Nintendo.  Well, I received confirmation today of two 3rd Party Wii games currently not being published or shipped in North America.  One of the games canceled wasn't surprising to me, but the second game was very surprising to me, because it was released less than a year ago!

The publisher I contacted was THQ.  If the picture up top, or the title of this entry didn't give it away, the two Wii games currently not being published/shipped by THQ are Ratatouille

(released in 2007) and Deadly Creatures

My source at THQ said both the games, "...are currently 'inactive', meaning that they are not currently being manufactured...".  My source said that they weren't aware of any plans to "...shift the titles back into production...".  If you were planning on picking up either of these games, now may be a great time to locate a copy.

Questions:
I was/am interested in Deadly Creatures, but I never picked it up.
If you played either of these games, what did you think about them?  If you haven't played either of them, does the information from THQ about these games not being manufactured currently, make you want to try to find a copy of them now?
Posted by coffeewithgames at 2:25 AM