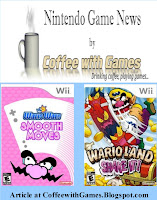 Earlier today, I reported that Nintendo is no longer producing or shipping Mario Strikers Charged

GoNintendo.com was one site that reported on my story.  A GoNintendo reader, 8 bit, stated in the comments section on the story, "...I thought WarioWare was the one being discontinued, since it's older. Is that one still in production?"

It made me curious, so I asked if WarioWare: Smooth Moves

The Wii has had two Wario games published for it, WarioWare: Smooth Moves in January 2007 and Wario Land: Shake It! in September 2008, yet neither Wario game is being shipped now!  Why?  Does Nintendo think new Wii owners would not enjoy these games?

While my sources couldn't give specific reasons as to why the Wario Wii games aren't being produced and shipped anymore, I wonder if Nintendo will be soon announcing a Player's Choice lineup of Wii games, and perhaps these Wario titles will be in the lineup?
If you're looking to purchase either of these titles, you can check 2nd/3rd party vendors on Amazon.com, as shown below, as well as other sites.  Be careful though, as some of the prices are outrageous now!

Questions:
What do you think?  Will Nintendo introduce a new line of $20 Wii games as Player's Choice games, like they did on the GameCube, or are these games just being put out to pasture?
Do you own either WarioWare: Smooth Moves or Wario Land: Shake It!?  If so, what do you think about the games?  If not, do you plan on trying to purchase them now?
Posted by coffeewithgames at 1:29 AM