.  I've only played one Super Monkey Ball game, and that was back on the GameCube.  Evidently the series has done pretty well for Sega, as they're still making the games.

Take a look at the promotional email, if you weren't interested before, maybe it's something to get you interested in the game: 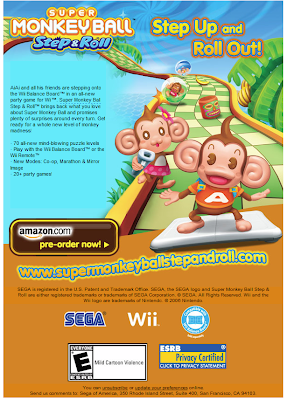 Super Monkey Ball Step & Roll is scheduled for released next month on February 9, and the email encourages you to "pre-order" the game on Amazon.com.  If you're interested in doing so, Amazon.com has the game available for pre-order for $46.99 and it also comes with "a $10 Video Games Credit":

Questions:
Have you played any of the Super Monkey Ball games?  If so, what do you think about them and do you plan on buying this game when it comes out?
Posted by coffeewithgames at 3:01 AM