How much has Xenoblade Chronicles been played? Official U.S. Nintendo Channel data report. 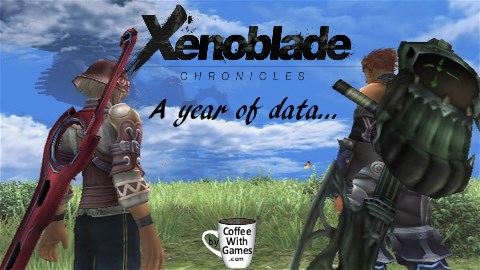 Coffee Beans
Xenoblade Chronicles released last year in the U.S. on April 6th. The game was sold exclusively at GameStop (stores and online) and had a MSRP of $49.99.

The game was developed by Monolith Soft and published by Nintendo, and received an ESRB rating of "TEEN" with "Blood, Mild Language, Partial Nudity, Use of Alcohol and Tobacco, Violence" listed as content for parents and gamers to be aware of.


The Brew
Xenoblade Chronicles now has approximately 15,193 U.S. Wii owners that have gameplay data reported through the Wii's Nintendo Channel, with 367 days possibly reported. The game has seen an increase of about 12,000 more players with data reported, since its initial data report last year.

Considering Xenoblade Chronicles was somewhat of a limited Wii release, being only available at one retailer, the game's first year of reported data is pretty good. The game now has 650,133 Total Hours reported (shown in the image above), which is an increase of almost 600,000 Total Hours since the initial debut amount.

For some comparison to other exclusive Wii games, Xenoblade Chronicles' first year's worth of Total Hours reported isn't as high as what Metroid: Other M or Monster Hunter Tri had reported; but it is higher than what Red Steel 2 had reported over its first year.

The game's average reported play-time is now 42 Hours 48 Minutes "Per person", which is an increase of 25 Hours 55 Minutes to its debut average from last year. According to the data shown, U.S. Wii owners spend nearly 3 hours playing Xenoblade Chronicles each time they sit down to play it.

Caffeinated Thoughts
Nintendo released a Wii U Nintendo Direct in January this year, and ended it by showing a new game that Monolith Soft is currently working on for the Wii U. The game was hinted at being titled X, at the end of its trailer, and appears to be a spinoff of Xenoblade Chronicles of some sort.

If you have not seen what Xenoblade Chronicles looks like in action, and if you haven't seen what Monolith Soft's Wii U game looks like, the trailers below should give you a decent idea:

I have not played Xenoblade Chronicles, and don't own it. Seeing some of the asking prices for it on Amazon.com now, and even the "used" price on GameStop.com while putting together this piece makes me think the game won't be joining our collection anytime soon.

That being said though, I do think the reported gameplay data, both the Total Hours and the average "Per person", is pretty impressive for what was a limited U.S. Wii release. If Monolith Soft's new Wii U title provides anywhere close to the average hours "Per person" that Xenoblade Chronicles has for Wii owners, I think it might be worth a buy when it releases (assuming Nintendo of America doesn't take several years to actually publish it, once its fully developed and translated).

Questions
Have any of you played Xenoblade Chronicles in the last year, and beat it? If so, do you know if your hours to beat the game, are about how many are reflected in the Nintendo Channel data? Is Xenoblade Chronicles a game you would recommend to Wii, or even Wii U owners, that might be looking for a new RPG game to play?

If you enjoyed Xenoblade Chronicles, are you looking forward to Monolith Soft's next Wii U game?

You can find product links to Xenoblade Chronicles below: 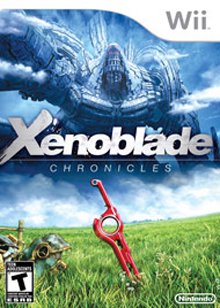 Posted by coffeewithgames at 12:20 AM