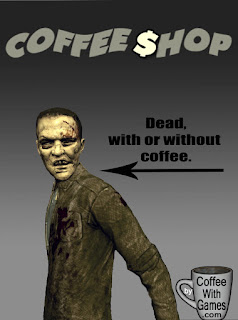 Coffee Beans
Do you enjoy The Walking Dead TV series? Are you interested in the new The Walking Dead: Survival Instinct game that is scheduled to release next week, on March 19th?

If you have been thinking about purchasing the game when it releases next week, but haven't pre-ordered it yet, now is a good time to do so. The game is releasing on the PC, PlayStation 3, Wii U, and Xbox 360, and has a MSRP of $49.99. Amazon and GameStop are offering different pre-order bonuses, but Amazon has now discounted the game's pre-order price by 25%.

You can currently pre-order The Walking Dead: Survival Instinct from Amazon.com for just $37.49. The pre-order price is for the PlayStation 3, Wii U, and Xbox 360 versions, but not the PC version right now.

You can take advantage of the pre-order price right now for The Walking Dead: Survival Instinct from Amazon.com, with all the versions linked below (again, the PC version is currently not discounted):

Posted by coffeewithgames at 4:07 AM