Coffee Beans
Remember January 4, 2011? If you don't, that was the day I posted my "New Year's Video Game Resolution". What was my New Year's Video Game Resolution for last year?
I simply said, "...that I won't purchase any NEW or USED video games in 2011, until I finish my backlog of video games on my current generation consoles."
The image below is what my backlog of video games looked like in January 2011: 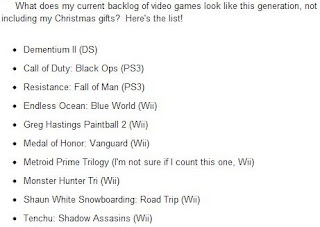 The Brew
So, did I stick to my resolution and complete all the games? Here's the list from above, and the updates:


So, I "justified" not completing Shaun White Snowboarding and Metroid Prime Trilogy in 2011, due to one being a gift (see another example below) and the other having a Wii game I had already completed before (Metroid Prime 3: Corruption).

Now, the question you may be wondering is, "Well Coffee, did you make it the full year without purchasing a game?"
Simple answer. No. Technically though...sort of. Let me explain.

Filtered Thoughts
Back in November, Best Buy had a major sale on some video games. One of those games was Metroid: Other M. Best Buy was selling the game for only $4.99. When I saw the sale, I immediately sent Mrs. Coffee an email with a link to the game/sale on BestBuy.com, twice! I wanted to make sure she got it. I figured for $5, it could be a stocking stuffer/Christmas gift surprise, and even told her, "If you do get it for me, don't tell me."
Well, seeing Metroid: Other M for only $5 was tempting, especially considering I was operating CoffeeWithGames more frequently during then, so I purchased a copy with the justification that I would use it as a giveaway on the site one day. Mrs. Coffee noticed I had purchased the game, and let the beans spill that she purchased me a copy of the game as well. Unfortunately, due to Best Buy being run by idiots, in my humble opinion, her order was canceled/not fulfilled.
So, Metroid: Other M was the only game I purchased in 2011, but my reason for purchasing it was not originally as a self-purchase. Will the giveaway still happen? Yea, but whoever wins it, won't get the game sealed and brand new...you can thank Best Buy's terrible business practices for that!

While I completed nearly every game originally listed, there are a few other games I completed in 2011 that were not on my New Year's Resolution list. They are:


Out of the original 10 games I listed, I completed eight of them, seeing the credits roll. For all of 2011 though, I beat 13 games.
In short, I sort of fulfilled my 2011 New Year's Video Game Resolution, and I sort of failed it (thanks to Best Buy).

Questions
What do you think? Was my justification on removing Metroid Prime Trilogy and Shaun White Snowboarding from the list good enough?
Are there any games I played/completed in 2011 that you would be interested in reading my impressions about?
Posted by coffeewithgames at 2:42 AM