Coffee Beans
Call of Duty: Modern Warfare 3 was released on November 8, 2011 for all the current generation home consoles. The Wii version released at a MSRP of $49.99, and it was developed by Infinity Ward/Sledgehammer Games and ported to the Wii by Treyarch, and it was published by Activision.

The Wii version received an ESRB rating of "Mature" with "Blood and Gore, Drug Reference, Intense Violence, Strong Language" listed as content for parents and gamers to be aware of.

How many hours have Wii owners put into Call of Duty: Modern Warfare 3, and does it appear they are playing the game online any? Let's take a look! 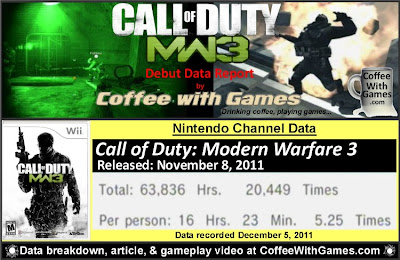 The Brew
Call of Duty: Modern Warfare 3 has 3,895 Wii owners that have reported data through the Nintendo Channel since it released last month, and the game's average play-time per day/session is 3 Hours 7 Minutes.

The Wii version of Modern Warfare 3 has a "professional" review score average of 70.67%, based on 9 reviews on GameRankings.com.

The game currently has a 4 out of 5 Stars rating on Amazon.com, based on 21 customer reviews. When converted to a 100% review scale, Modern Warfare 3 has an 84.76% review score average from the 21 reviews on Amazon.com.
Caffeinated Thoughts
I have been enjoying my time with Call of Duty: Modern Warfare 3 on the Wii, and if you aren't aware, the Wii version has been patched not once, but twice now; and they even did some behind the scene "fixes" that didn't require a download.

I finished the single-player campaign in roughly 6 hours, and have spent about another 2 hours going back and playing through some of the levels again. Based on the reported hours, I definitely think Wii owners are playing the game's online multiplayer.

The video below shows off the first few minutes of one of my multiplayer matches after the second patch was released for the game. If you're wondering, the results in the video were based off of luck, not skills:


Seeing Call of Duty: Modern Warfare 3 debut already I think continues to show there is a market for FPS games on the Wii, and specifically FPS games with online multiplayer even given the Wii's online use of "friend codes".

If any of you are interested in Call of Duty: Modern Warfare 3, you can see the PS3, Wii, and 360 versions on Amazon.com linked below:

Posted by coffeewithgames at 7:05 PM