Three weeks ago my wife and I, along with our son, flew to Louisiana to visit family over my Spring Break from college.  Our original flight was canceled due to mechanical issues, so we left a day late, on March 3.
While we were down, we visited both my family and Mrs. Coffee's family, over a period of 5 days.  The weekend we were there, we stayed with my wife's family.  Her older brother owns a PS3 and had been enjoying Call of Duty: Black Ops, and he ended up going to his house Friday night, and bringing the PS3 and Black Ops over.
While my wife fell asleep on the couch early(11-ish probably) Friday night, I stayed up until about 3AM with her two brothers, playing Black Ops online.  We would take turns, and play one round each, then pass the controller off.
We played Black Ops Saturday during the day some, and then late Saturday night as well, until about 3AM again.  Earlier Saturday evening, Mrs. Coffee's older brother went and purchased another PS3 controller, so we could play splitscreen online multi-player, and we had a lot of fun doing it.
The reason this post has been delayed for 2 weeks is because I was trying to get a video from one of the multi-player matches that was played in Black Ops over that weekend, but I haven't had any luck getting it with Call of Duty's Theater Mode.

So, after spending time with Mrs. Coffee's family, and playing Black Ops on Friday, Saturday, and little Sunday afternoon, we headed back to my parents' house.
I think it was Monday night, the night before we were leaving, that my brother came into the living room holding a shoe box.  The shoe box was treasure chest of video games that had been sitting in my closest for probably the last 10 years!
"What video game treasures were in the shoe box?"  I'm glad you asked!  Take a look:

If you can't read the games, and don't know them by the game cases, they are:
"What'd you do with those video game treasures?"  Glad you asked, again!  Like any good pirate(or bad pirate?), I stuffed them in my carry-on, and they made the return trip with us.  The only problem now, is finding a NES and SNES to play them with, as our systems are AWOL for the moment.

Now, not only did I acquire the treasure chest of games while we were down, but a good friend came to visit us while we were at my parents' house, and he brought two PS3 games for me to have...they are: 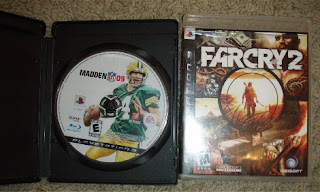 We enjoyed the trip visiting family and friends, minus the canceled flight cutting a day out of it, and I really didn't think I would be returning with eight video games, but I guess they'll help me with more stories on the site perhaps!

Have any of you ever re-discovered video games, that had just been sitting in a box, perhaps for years, like I did over my Spring Break?
Posted by coffeewithgames at 12:39 AM