Too Sick To Game


Coffee Beans:
Some of you may have noticed last week that I only did one "data" story, and that was it.  I didn't do my "FPS Friday" post as I had done 4-weeks in a row prior to this past Friday, and I didn't get to finish my post(now coming this week) I was working on about Mrs. Coffee and I finishing Donkey Kong Country Returns.

Well, last Thursday morning I woke up feeling a little cold.  I thought, "What'd we leave the heat on last night?!"  I finished getting ready for class, and as I was about to leave Mrs. Coffee handed me an egg, cheese, and toast sandwich she had prepared me...I usually wolf those down...but after one bite, I said something like, "I'm not hungry, but I'll take it with me."
As I was sitting in class, I was still feeling cold, but dismissed it after another classmate said, "It's cold in here!"
After surviving the drive home, I walked in the door and set my still unfinished breakfast sandwich and backpack on the table, and told my wife that I wasn't feeling well, and was going to lie down.
I slept Thursday afternoon until about 4:30PM when she woke me up, and when I checked my temperature it was around 102 degrees at the time.  She found some Nyquil-ish type cold/flu medicine and gave it to me. 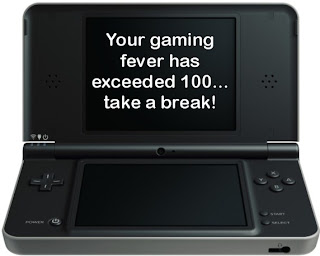 I stayed up Thursday evening like a zombie watching our son, but played the "Stay as far away as possible" game, hoping to not get him sick.  I ended up staying in the bed pretty much all day Friday with a fever, then helped watch our son for a few hours again Saturday morning, and as soon as my wife walked in the door, I headed straight back to the bed.
Before I got sick last Thursday, I had told a blog follower(who runs his own gaming blog, MyLittleGamer.Blogspot.com) that I would try to play some online matches of ExciteBots: Trick Racing with him and/or his son, and record footage of the matches.

It didn't happen Thursday, and it didn't happen Friday.  When I was awake Saturday morning, I knew it wasn't going to happen then either, so I sent him a message Saturday afternoon before passing back out, letting him know I was sick and I wouldn't be hopping online to play for a while because I was sick.
I got out of the bed briefly Saturday evening to eat some soup, and headed back to it soon after.  I was taking the cold/flu medicine about every 4 hours(as directed), but it didn't really help with sleeping, as I just found I myself to be tossing and turning often.

Saturday evening I decided to bring my DS Lite to the bed, and see if perhaps I could play some while I was tossing and turning...after only playing for a period of about 10 minutes, I knew I was too sick to play!  I couldn't concentrate on the game enough with my headache, neck-ache, backache, and random coughing fits, so I put the DS Lite away, and went back to tossing and turning for a few hours before falling asleep again.

Today marks the fifth day of fighting this(apparently the flu), but I'm feeling better than I was this past Thursday/Friday/Saturday/Sunday/Monday...though feeling better than those days, isn't saying a whole lot!
I should be getting back to posting on a more regular basis this week, with a data post coming later tonight...

Thoughts/Questions:
I really hope all of you and your family/friends stay well, and avoid getting what I've had.  This was the first time, in the longest, that I can remember actually being too sick to game, and instead preferring to sleep.
Can any of you recall being so sick, that you didn't feel like gaming or doing anything other than sleeping?
Posted by coffeewithgames at 7:17 PM