Coffee Beans
Mrs. Coffee and I have moved a lot over the last several years, and we have toted along one coffee machine/pot with us during each move, and it survived all the moves in pretty great condition.
I believe I received the coffee machine/pot as a Christmas gift either in 2000, or 2001, but I am not 100% positive because I can't find exact dates for when the series of coffee machines was released.
About 3 years ago after we moved into our house, Mrs. Coffee(my wife) thought that our coffee pot we had been using took up too much counter space, so she went to the store and purchased us a new one.  You can see the "space saver" coffee machine below: 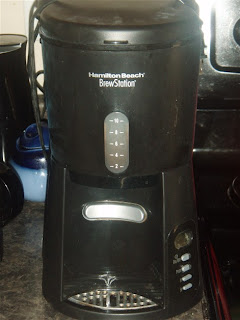 My initial reaction was probably something along the lines of, "Why do we need another coffee pot, when the one we have works just fine?", but I knew in her mind that more counter space = win, so I let it be.
Well, the "new" Hamilton Beach coffee pot that she purchased for us lasted right around a year, and then guess what, it BROKE!  Horror or horrors for a daily coffee drinker like myself, but luckily for us, I had stowed away our old coffee machine in a cabinet probably with the mindset of "Just in case something happens to this new one, we'll still have this one."

So, what does our coffee machine look like that we use basically on a daily basis?  Have a look below! 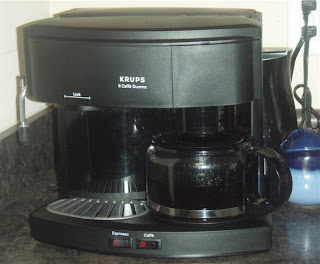 So that's our coffee machine, or "Krups" as I call it.  I know, it's a very original name I came up with!  As you can probably tell from the image, it's a dual coffee and espresso machine, though I rarely(if not using it once in the last 3 years is rarely) use the espresso side.
Our Krups coffee machine is pretty basic compared to some newer models now, as it doesn't have a clock so there's no way for me to program it to turn on each morning, but the burner and pump are still working and that's all that matters...as long as the coffee brews, I'm good to go!
Filtered Thoughts
While the Hamilton Beach coffee machine was nice while it functioned, and it did save counter space, I didn't feel like trying to get a replacement part for it even though it had a clock and could be programmed to turn on.
The Hamilton Beach didn't stop brewing the coffee, but the problem was the spout where the coffee would come out.  For some reason the spout stopped working and wouldn't close back properly, which resulted in coffee continuously pouring out of the spout when a coffee cup would be removed after filling it.

As for Krups, while I haven't used the espresso side in a long-time, I may give it a try in the near future to see if it still works, and possibly start brewing a few espresso drinks at home on a regular basis.

Questions
Do any of you have a name for your coffee pot?  Do any of you not use a coffee machine as we do, and perhaps you use a French press or an entirely different method for brewing coffee?

P.S.
If you don't know, I did use the Krups coffee carafe in a photo for the site back in June, HERE.
Posted by coffeewithgames at 4:31 PM