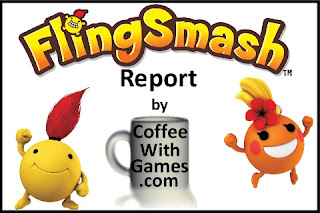 Coffee Beans
FlingSmash was released for the Wii on November 7, 2010.  The game was part of a controller bundle with a MSRP of $49.99, which included the game and a Wii Remote+

.
The game was developed by Artoon and published by Nintendo.  It is listed as an "Action Sidescroller" by Nintendo, and can be played by 1 or 2 players.
FlingSmash received an "Everyone" rating from the ESRB with "Mild Cartoon Violence" listed as content for gamers/parents to be aware of.

Do the reported game-play hours for FlingSmash show it as a smashing success, or more of a flinging failure with 253 days of data reported on its debut?  Let's take a look!

Approx. Number of Players Having Reported Data
FlingSmash had about 17,070 Wii owners that reported game-play data through the Nintendo Channel from the game's release on November 7, 2010 until July 18, 2011.

Average & Total Game-Play Hours
FlingSmash had 50,092 Total Hours of game-play reported for its debut, with the average play-time being 2 Hours 56 Minutes "Per person" that reported data.
The game's average play-time is just over 57 minutes per session.

Filtered Thoughts
I haven't played FlingSmash, and at this point I doubt I will unless we end up buying the FlingSmash bundle at a later point.  Being that I already own a Nyko Wand+, which is basically a Wii Remote+, and our neighbors have let us borrow an additional Wii MotionPlus unit with Wii Sports Resort, I don't see us purchasing an additional controller soon.
If you have not seen anything about FlingSmash, the trailer below is designed to give you an idea of how the game plays using the Wii MotionPlus:


As for the reported game-play hours, the fact it took FlingSmash a little more than 8 months to debut on the Nintendo Channel I think shows a few things:
1)  The game is very short, as the reported "average" seems to verify
2)  Wii owners that are playing it, perhaps aren't playing it again once they beat it
3)  Bundling a game with an accessory doesn't always guarantee great success

, as well as many others that were released before it, the fact that it was bundled with a Wii Remote+ during the holiday season really made me think it was going to debut a lot faster than it did.
Considering FlingSmash took 8 months to reach the 50,000 "Total Hours" to debut, I doubt the game will cross one million hours of reported game-play during the Wii's life-cycle, which seems to be near its end.

My verdict on whether the game has been a "smashing success, or flinging failure" would be more to the "flinging failure" side as for reported game-play hours because this wasn't just a random third party game that released, but it was a game published directly by Nintendo and bundled with a controller during a holiday season.

If any of you are interested in FlingSmash, you can see the price for the game only on Amazon.com linked below:

Posted by coffeewithgames at 4:51 PM