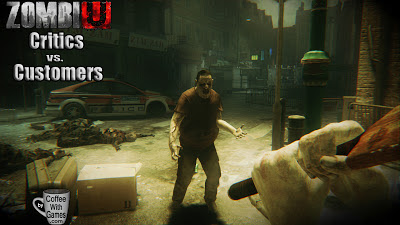 ZombiU released for (and with) the Wii U on November 18, 2012, basically as a brand new IP. The game was developed and published by Ubisoft, and received an ESRB rating of "MATURE" with "Blood and Gore, Intense Violence, Strong Language" listed as content for gamers and parents to be aware of. It released with a MSRP of $59.99 in the United States, and can be purchased either via a physical retail copy from stores, or a digital "copy" through the Wii U's eShop.

With a full month of "professional" critic reviews and customer reviews for ZombiU to look at now, and having completed the game myself, is ZombiU a Wii U title you should play (if, you are of age)? Have Wii U owners agreed with the "professional" reviewers on ZombiU? Brew yourself some coffee, and let's take a look!

The Brew
While reviews for the game were under an embargo, GameSpot "leaked" their ZombiU review in a professional fashion (see: sarcasm) a few days early by publishing it on their site, then removing it. The damage was already done though, and their review score quickly spread around different message boards and video game websites.

Caffeinated Thoughts
I chose to not read most ZombiU reviews, until I finished the game. I didn't want to see "problems" with the game before playing it for myself, and I was also afraid some of the reviews might have contained spoilers, so I didn't want to read or see anything that might have given something away in the game.

After I completed the game, I decided to read the "reviews" of the game and see what some of the problems were, and what did I discover? Apparently, the problem many early "reviewers" of ZombiU had is they were too busy to finish the game (see: complete it), before slapping a score on it. Apparently, the proper way to "review" games these days is to watch a few trailers, read a few impressions of it, play it for maybe an hour; then decide if you want to go positive or negative in the "review" and stick with it.

What "reviews" of ZombiU contain either outright incorrect information, or show the "reviewers" apparently didn't finish the game? Here's my short list, for now. IGN. Nintendo Life. Game Informer. Then there is Game Spot's reviewer, who went into the game knowing (I guess) it is a survival horror title, but thinks it should have been an action game instead? GameSpot's reviewer though, and many others, did seem to like ZombiU's multiplayer options, which Mrs. Coffee and I did try out one evening together.

Here's a video of Mrs. Coffee and I playing ZombiU's local multiplayer. Mrs. Coffee was using the Wii U GamePad to place zombies around the map, and I was the survivor running around with the weapons, trying to survive for as long as possible:

Is the audio synced up correctly? It seems off on YouTube, but right in my player. Feedback?

ZombiU gives you that information. The game tells you how many hours (and minutes and seconds) it takes you to finish the game, and how many survivors it takes you to finish the game as well. Kotaku's Stephen Totilo is the only reviewer of ZombiU I am currently aware of that provided the number of hours it took him to complete the game, and the number of survivors it took him to get through it. His review of ZombiU is HERE.

As for myself, I completed ZombiU in 24 hours, 40 minutes, and 10 seconds according to my game's "Playtime", and it took me 34 survivors to complete the game. I have many ex-survivors wandering the streets, sewers, and general areas of London still, so please add my Nintendo Network ID of Coffees to your Wii U friend list if you want more zombies wandering around your ZombiU game.

Should you play ZombiU, if you are above the recommended age? I recommend giving the game a try. Whether that is buying it, renting it, or borrowing it from a friend (my copy is currently loaned out right now actually). I think you will enjoy the game if you don't go in expecting a FPS game, or an action game, and understand that the melee combat is designed, I believe, to keep you on your toes. You shouldn't expect to get 100 hit zombie combos in the game, and understand that ammunition for guns is scarce. Many of my hours playing were spent exploring different areas in the game. There are small alternate paths in a few areas that you may miss if you are just running through the game, and sometimes those areas contain weapons and ammunition, and even story pieces. I believe exploration is encouraged in the game.

So, based on the review averages for the game so far, I side more with the "customer reviews" averages than the "critic reviews". I think ZombiU is another perfect example of why there should be basic video game review standards on sites, as I have written about in the past.

Questions
Did any of you perhaps not purchase ZombiU, because of the early reviews on the game? If you have played ZombiU, what do you think about the game?

If you have played and beaten ZombiU, how many hours and survivors did it take you? Also, have any of you attempted to beat Survival Mode yet, and possibly completed it?

You can purchase ZombiU below from Amazon.com, and find out how long you will survive!

Read other Critics vs. Customers pieces here and here.
Posted by coffeewithgames at 6:45 PM